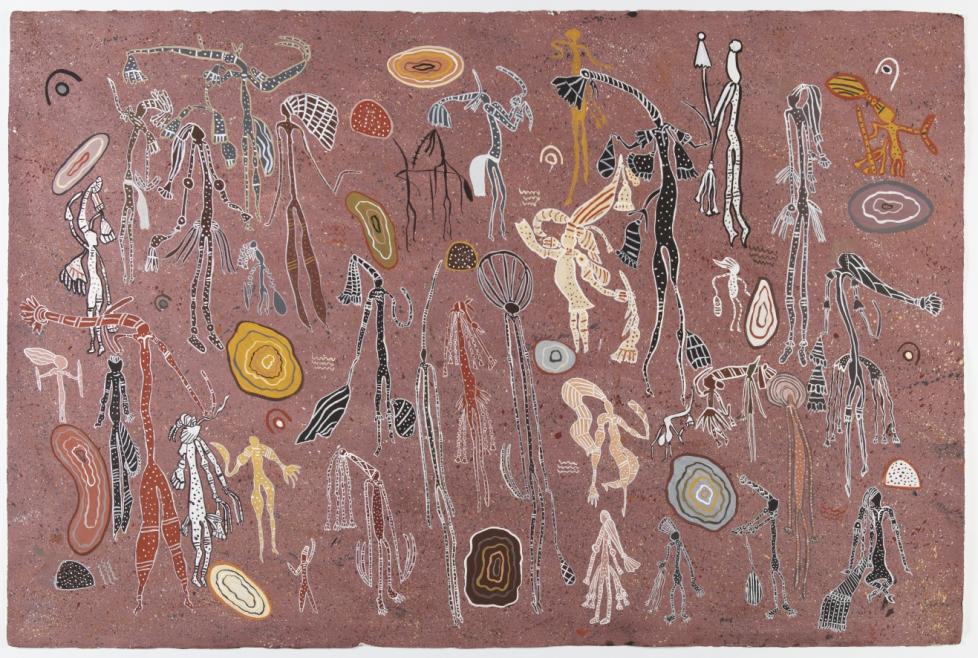 In the remote region of Kalumburu and its surrounds, the Kwini people’s ancestral creator is the Wandjina; the rainmaker and creator of cyclones and great floods. Wandjina can bring an abundance of foods or can choose to punish Kwini people when they disobey Aboriginal law. Alongside the Wandjina, the Kira Kiro spirits play an important role. They are the helpers of the Wandjina and teach people the law, how to hunt, share, and respect the land. Among the Kira Kiro is the warrior Kira Kiro who protects and fights for the land. "Muanbarra are the male and female law keepers. They are more powerful than the ordinary Kira Kiro. They are protectors of the land and will fight with anyone who trespasses onto their Country." Bundamurra’s subject matter is Kwini lore and the artist playfully discloses this through her elaborate and unique depiction of Muanbarra, the warrior Kira Kiro dancing amongst the Kira Kiro to celebrate Kwini people’s successes among the rock pools. Unlike the typical depiction of Muanbarra, as painted by her peers and her ancestors on cave walls, Bundamurra’s spirits are multifarious, sometimes enlarged, exaggerated, with their limbs elongated and distorted. They are adorned with extravagant head-wear, tassels, and artefacts , outstretched and disproportionate to their bodies, their fastidious detail further highlighting these unique features.

Reproduction Inquiries Contact us about this artwork
< Back to search
Vernon id: 23924
© 2021 Art Gallery WA All rights reserved.