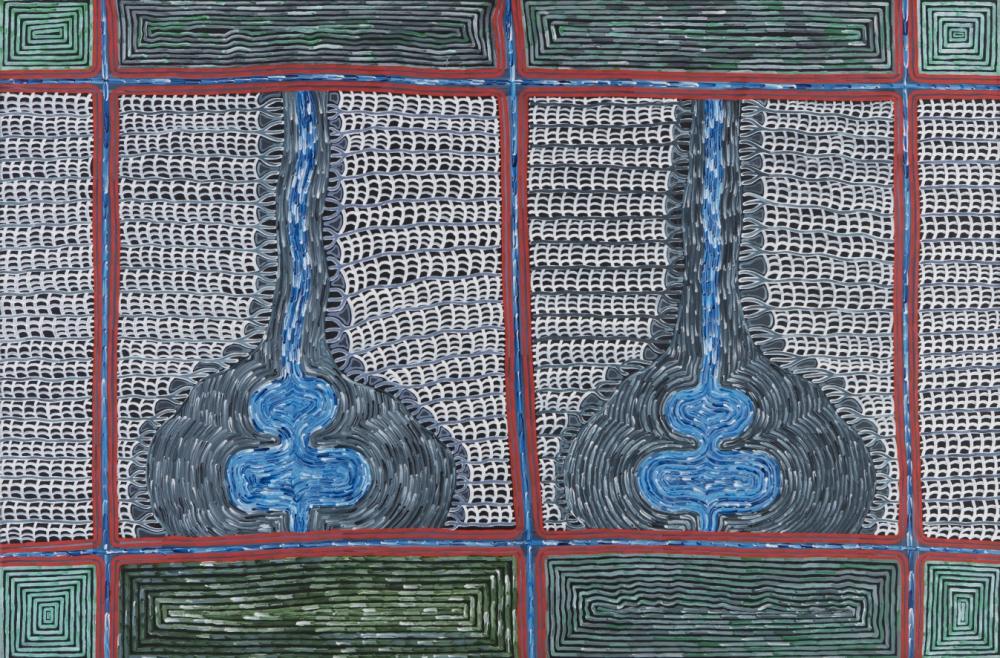 Claude is deeply committed to the maintenance of his culture, and whilst still relatively young, is regarded as a leader in his community. An initiated man, he has placed great importance on acquiring traditional knowledge from his older relatives. Claude's interest in art developed as a result of watching his wife paint, when he formedstrong mental images of how he could represent his own country on canvas. He started painting in 2005 with Mangkaja Art Centre at Fitzroy Crossing. His two principal themes are Goonboorroo, a waterhole of deep culturalsignificance for Gooniyandi people and Claude's family in particular, and Minmingalla, his grandmother's birthplace.In 2009 he began painting only using natural earth ochres. His work is strongly conceptual, and intimately concerned with a semiotics of place. The painterly concern and the way he applies ochre to canvas reveals the careand respect he holds for his subject. The graphic quality of his fluid and geometric lines, and unusual pigment blends contribute to Claude Carter's truly unique style.MR 15/10/18

Curatorial insightClaude Carter resides in a small community called Bawoorrooga with his wife Andrea Pindan, who is also an artist. Claude has been painting professionally since 2005. Painting helps him to clarify and distil his thoughts about his country and the places he paints. He feels the land and culture through his stomach and heart and conveys these painted emotional spiritual responses to the viewer. His work possesses a strong graphic quality. His painting themes include bush fruit girndi (plum), Goorroola (main waterhole) for Minmingalla country, Gooniyandi country: Cabbage Woods, Campbell Spring, Minmingalla, Mimbi Caves and Bohemia Downs. (Mangkaja Arts for Desert River Sea, 2017)

Reproduction Inquiries Contact us about this artwork
< Back to search
Vernon id: 22991
© 2020 Art Gallery WA All rights reserved.