2014/0014.a-o …and meanwhile back on earth the blooms continue to flourish

…and meanwhile back on earth the blooms continue to flourish 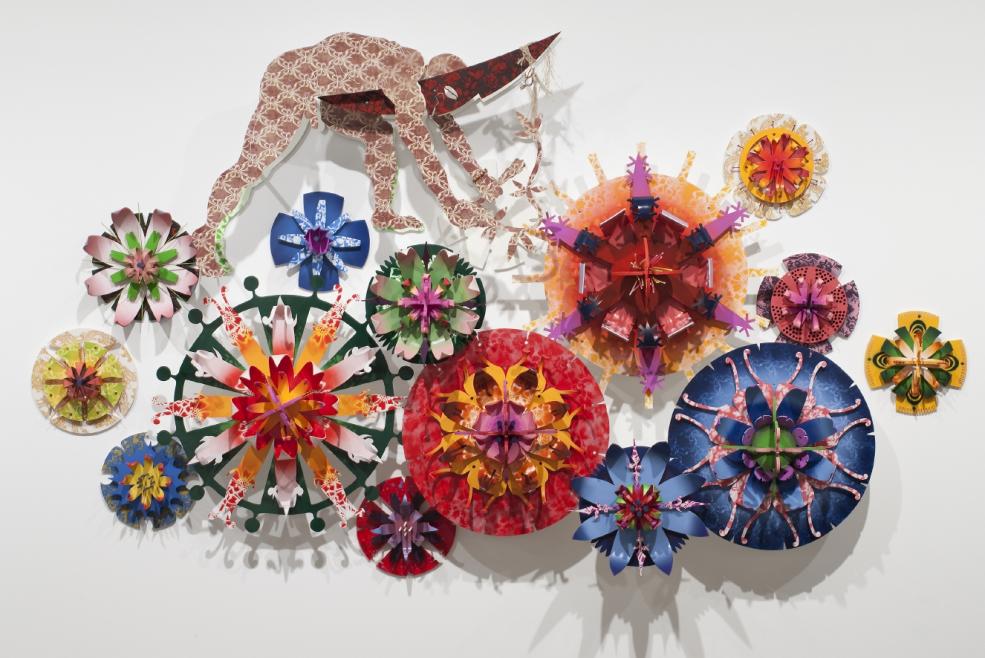 Artist statement, 2013Skill in gardening was partly dependant on understanding the seasons including knowledge of the movement of stars and constellations, tidal patterns, and migration of birds and certain sea creatures. Agricultural fertility also entailed a respect for inherited ancestral land and knowledge of how to influence rainfall and the growth of plants through actions, words, songs and the use of figures and stones.Land cultivation was practiced to some extent throughout the Strait. Large areas of the rich volcanic Eastern Islands and the alluvial Northern Islands were cultivated. The coral-sand Central Islands and the high rocky Western Islands were less fertile and water was often less plentiful, but individual islanders and island clans did have some land under crops. Often these were established on nearby uninhabited islands.Areas were cleared of grass and shrubs with the use of stone and clam-shell axes, then the ground was tilled with hardwood digging sticks. Burnt vegetation was used as a natural fertilizer, but certain magical rites and ceremonies were commonly performed to ensure good crops. Gardening was considered an important and competitive skill and individuals kept secret their ways of producing good crops.The principal food crops were varieties of yam, taro, sweet potato, coconut, sugar cane and banana. Trees and bushes that provide useful materials are also cultivated. These include bamboo, tobacco, hibiscus (for rope and for the flower), seeds, pandanus and the wongai (for the fruit and the wood).Today, gardening practices have changed dramatically with many islanders preferring to plant on smaller plots near their houses rather than travelling long distances on foot or by dinghy to clear old garden beds.

Reproduction Inquiries Contact us about this artwork
< Back to search
Vernon id: 20915
© 2020 Art Gallery WA All rights reserved.