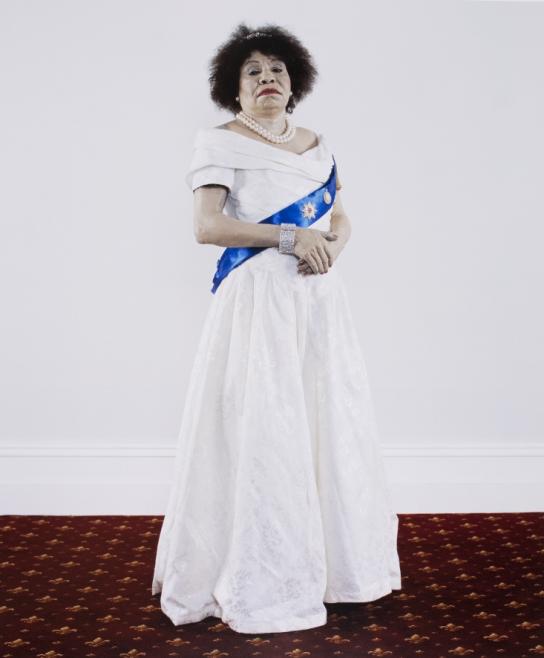 The two photographs are from the artist’s 2013 series, Mulaga Gudgerie, which features the Queen and Prince of Australia dressed up ‘to the nines’ in their Royal garb. The uncovered flesh of their bodies is caked with white theatre paint, creating unreal figures that appear like waxworks. The photographs are not about beauty and the painted colour of each actor’s skin is not meant to appear to be natural. Darren Siwes asks, ‘if we accept Aboriginal people as kings and queens would we then accept the things they do as just and enlightened – the same way society does for the elite? Or would they still be gazed upon with suspicion’. By creating discomfort, Siwes gives us an opportunity to build new ideas and dialogues that make us look anew at ourselves, and at the structures placed around us.

Curatorial insightThese photographs from the Mulaga Gudgerie series are contemporary reflections on post-colonial Australia and the role of the British monarch in colonised nations. Siwes has inserted two Indigenous figures into the manufactured diorama that creates the setting of these photographic portraits. They occupy the roles of Queen and King. Through this Siwes alludes to the ongoing desire Indigenous Australians have for self-governance while also making reference to the complex social structures, and customary lore which has, and in many instances continues to govern the lives of Indigenous peoples. These subversive and poignant works embody a sense of aspiration and ask the viewer to reflect upon the possibilities that the future presents for Indigenous Australians. (AGWA 2013)

Reproduction Inquiries Contact us about this artwork
< Back to search
Vernon id: 20857
© 2020 Art Gallery WA All rights reserved.