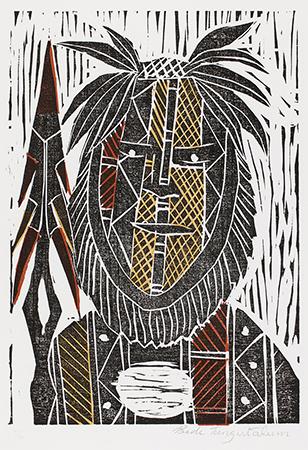 Curatorial insightIn My name is Tuuntulumi, the artist previously known as Bede Tungutalum is asserting himself and his identity as a senior Tiwi custodian. The pronunciation of his name and the incorrect spelling was bestowed upon him by non-Indigenous arts workers who were initially unable to understand Tiwi language. This work speaks to this imposed name and proclaims the true identity of the artist, under his complete control. The work is a depiction of the traditional Tiwi mask that selected initiated men wear when participating in ceremony. It is a self-portrait, and the artist’s eyes peer from behind the mask sternly, the upright spear and body markings making a strong statement about the character of the individual wearer. The markings of the print are confident and combined with the simple yellow and red ochre colours, as well as the charcoal and white, make this work masculine, assertive and compelling in its directness. (AGWA 2013)

Reproduction Inquiries Contact us about this artwork
< Back to search
Vernon id: 20693
© 2020 Art Gallery WA All rights reserved.