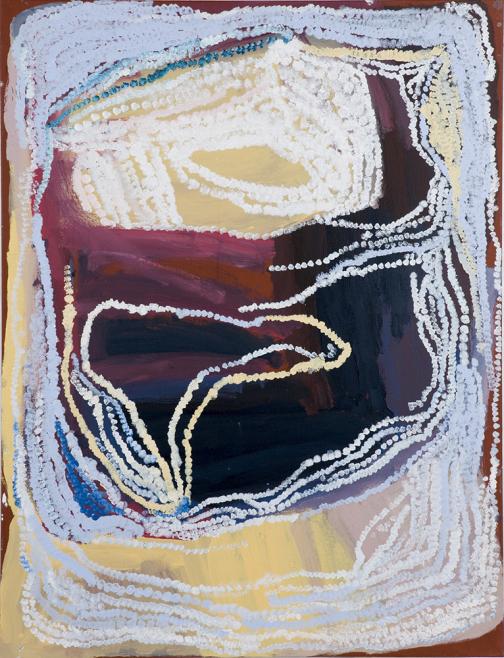 Jan mainly paints her birthplace of Kirriwirri. Jan says "this is the birth place of my father's clan. Our clan is also named Kirriwirri, and call each individual members of this clan Kirriwirri. There is a big warla (mud flat) at this place. This is what this painting is about. Kirriwirri is in the Great Sandy Desert close to the west of Well 33 on the Canning Stock Route. It is the birth place of Jan and her family. This work shows tali (sand dunes) and jila (living water).

Curatorial insightJan Billycan is one of the oldest of a group of artists that have emerged from the Bidyadanga community, which is situated south of Broome in the Kimberley region of Western Australia. She is one of the artists who left their homelands in the Great Sandy Desert in the 1960s and relocated to the Bidyadanga community. Through ceremony and song, the artists have kept their relationship to their homelands strong, and in recent years painting has also become significant in the documentation and transference of important cultural knowledge. Billycan’s repeated motif Kirriwirri is prominently featured within all of her paintings and is not only the artist’s birth site but is also a site of cultural significance for her community. (AGWA 2011)

Reproduction Inquiries Contact us about this artwork
< Back to search
Vernon id: 19803
© 2021 Art Gallery WA All rights reserved.