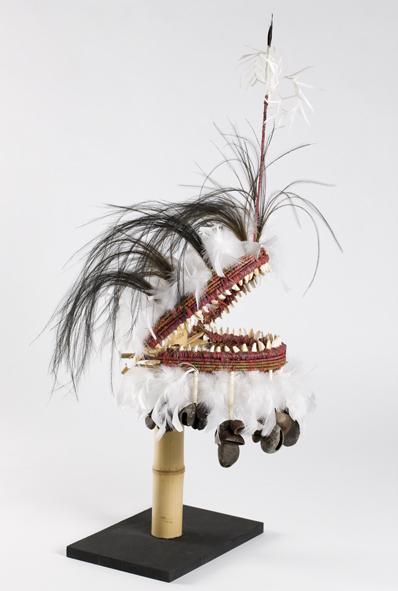 Dance machines (kab teir) that have moving parts, masks and headdresses (dhari) such as this one, are worn by dancers and others in ceremonies throughout the Torres Strait (Zenadh Kes). Idagi’s exquisite headdress is typical of headdresses from the island region, especially those that are fashioned in likeness or homage to the artist or wearer’s totem. The shark is an important totemic animal and ancestor for Idagi and others, such as artist Ken Thaiday Snr, who are from the eastern region of the Torres Strait.Artists and other cultural caretakers are reviving the culture and craft of making traditional cultural ornaments. The practice decreased, and nearly ended, with the introduction of Christianity in the 19th century.

Reproduction Inquiries Contact us about this artwork
< Back to search
Vernon id: 18812
© 2020 Art Gallery WA All rights reserved.