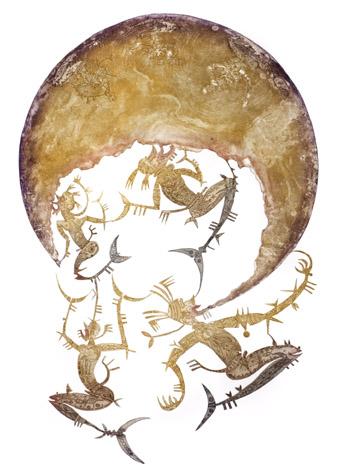 Curatorial insightAs a young boy growing up on Badu Island in the Torres Strait, Dennis Nona was taught the traditional art of woodcarving. This skill has been developed and translated into intricate and beautiful linocuts, etchings and sculptures created and pioneered by the artist since the commencement of his art practice in 1989. He documents in visual form the myths and legends of the Torres Strait, and in particular the stories surrounding tabu (the snake) and tupmul (the stingray) - his families’ totemic objects. Unlike traditional Torres Strait Island artforms, which favour the use of a single image to tell one aspect of a story, in his printmaking Nona utilizes multiple subjects across often quite large expanses of paper to relate entire narratives. Linking the narrative is usually a matrix of traditional clan patterns and designs. Nona explores the physicality of printmaking by hand-crafting and fine-chiseling the lines for linocuts and etchings, which are then hand-coloured before printing. (AGWA 2009)

Reproduction Inquiries Contact us about this artwork
< Back to search
Vernon id: 18764
© 2020 Art Gallery WA All rights reserved.