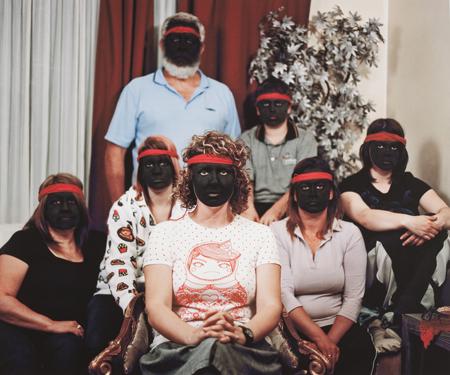 The three photographs Gnung ok, Wathaurung mob and Warre Beal Yallock are part of Bindi Cole Chocka’s 2008 series Not really Aboriginal. Gnung ok depicts sisters standing together, Wathaurung mob depicts the artist’s immediate family and Warre Beal Yallock is a portrait of the artist and her father. Together these works investigate identity and the cultural positioning of fair-skinned Indigenous Australians.About her photographs Bindi Cole Chocka says, ‘I made this series in response to certain prevailing attitudes that I was aware of. The first being that when I identified as Aboriginal, people would often respond by saying, but you’re not really Aboriginal. This was because I don’t fit the stereotype of what Aboriginal is – living in a remote community, very dark skinned and suffering from dysfunction. However, my grandmother always taught me to identify as Aboriginal and to be proud of the heritage I shared with her. The second attitude was one of lack of integrity. That, in fact, the only reason I was identifying as being Aboriginal was to obtain some amazing benefits that were to be had by being Aboriginal’ (The artist, bindi.cole.blogspot.com.au, 2011).MR 270918

Artist statement, 2008I've always been told that I was Aboriginal. I never questioned it because of the colour of my skin or where I lived. My Nan, one of the Stolen Generation, was staunchly proud and strong. She made me feel the same way. My traditional land takes in Ballarat, Geelong and Werribee and extends west past Cressy to Derrinallum. I'm from Victoria and I've always known this. All the descendants of traditional Victorian Aboriginal people are now of mixed heritage. I'm not black. I'm not from a remote community. Does that mean I'm not really Aboriginal? Or do Aboriginal people come in all shapes, sizes and colours and live in all areas of Australia, remote and urban? (Cole, Not Really Aboriginal exhibition catalogue, Centre for Contemporary Photography, Melbourne, 2008)

Reproduction Inquiries Contact us about this artwork
< Back to search
Vernon id: 18462
© 2020 Art Gallery WA All rights reserved.