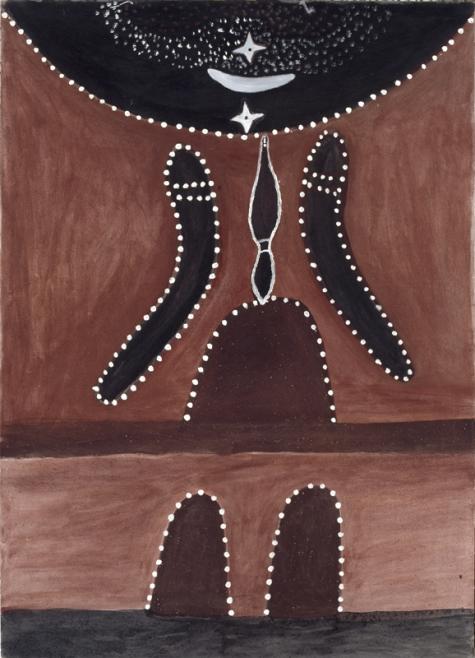 This is one of the last large paintings to be executed by Hector Jandany beforehis eyesight and health failed him. It is from the period of the early 2000s, whichis recognised as a highly productive phase of his career. Unusually for Jandany,who tended to mainly paint the Dreamtime stories of his mother's Ngarrgoorooncountry, north of Punululu, this painting is of his father's country which wasArgyle, Newry, Mistake Creek, Texas Downs, and includes his father's tools forhunting and fishing. Hector Jandany never knew his father because the latterdied when Hector was a baby, but he was shown his father's country by relativeswho took him there when he was ten years old. The tripartite organisation of thelandscape is a common composition for this artist as are the ringed conicalshaped hills. It is partly rubbed back with a stone and features a moon and(stars. The pale and delicate ochres characterise the recent work from Warmun,the pinks especially becoming a favoured palette for later artists.MR 20/09/18Extracted from aquisition form.

Reproduction Inquiries Contact us about this artwork
< Back to search
Vernon id: 18124
© 2020 Art Gallery WA All rights reserved.