Molly had a stroke 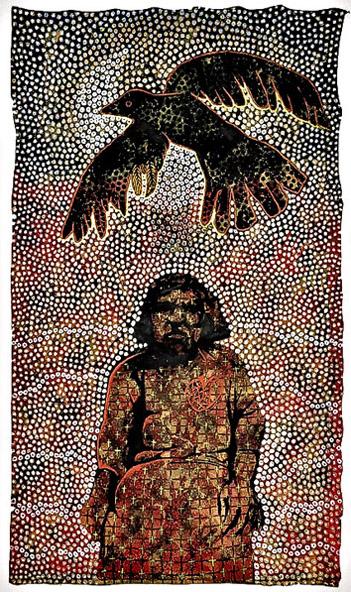 Artist statement, 2018In 1993, the same month I graduated from university, my grandmother and matriarch of our family suffered a severe stroke. The stroke inflicted major brain damage, and for a time, she was unable to speak or walk. With our help she was able to walk again but her speech was affected. The nurses and doctors at the hospital named her 'Mrs Miracle'. This painting is from the series I made when I helped her to recover. My Nana had lost almost all her English language, but she would sometimes talk in a very child-like Badimaya language instead. It appeared that this part of her brain had not been destroyed. She was stolen off her mother when she was a girl of twelve. This painting shows the raven/crow flying over her head as a messenger and under it is the moon – the symbol of water and women. Across my Nana’s body is a fence wire grid with crucifixes symbolising her long time at the orphanage. In her chest is her heart with small roads in it representing her life.

Reproduction Inquiries Contact us about this artwork
< Back to search
Vernon id: 14580
© 2020 Art Gallery WA All rights reserved.