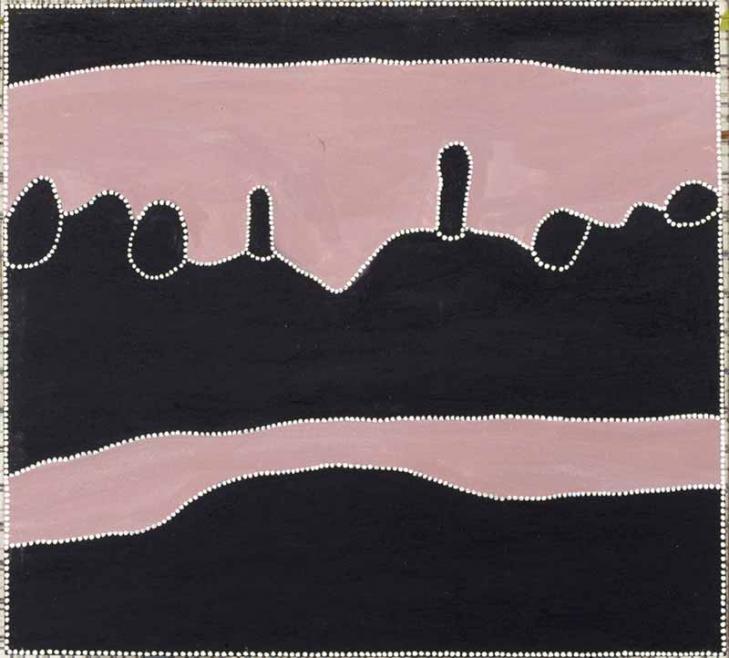 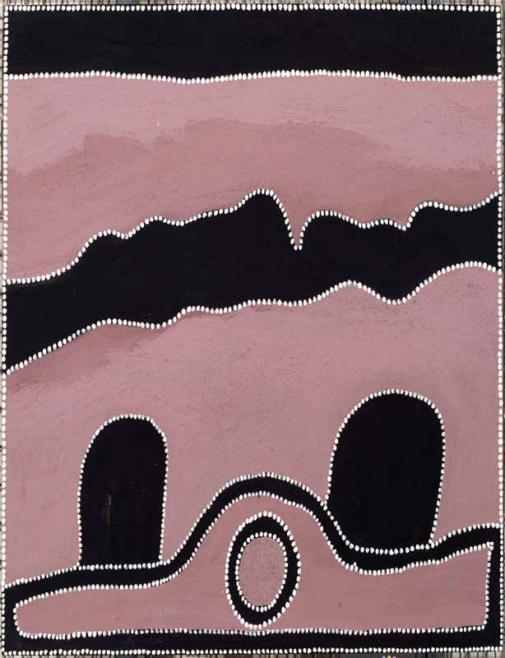 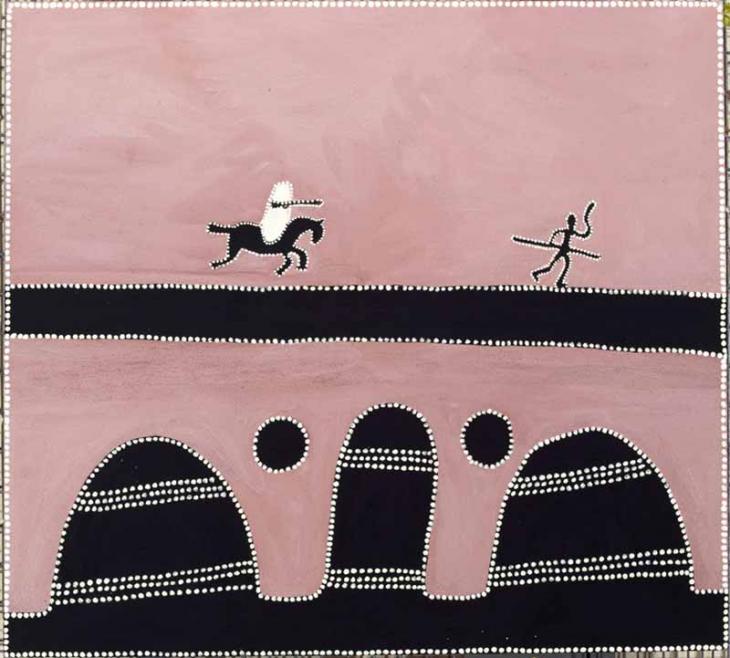 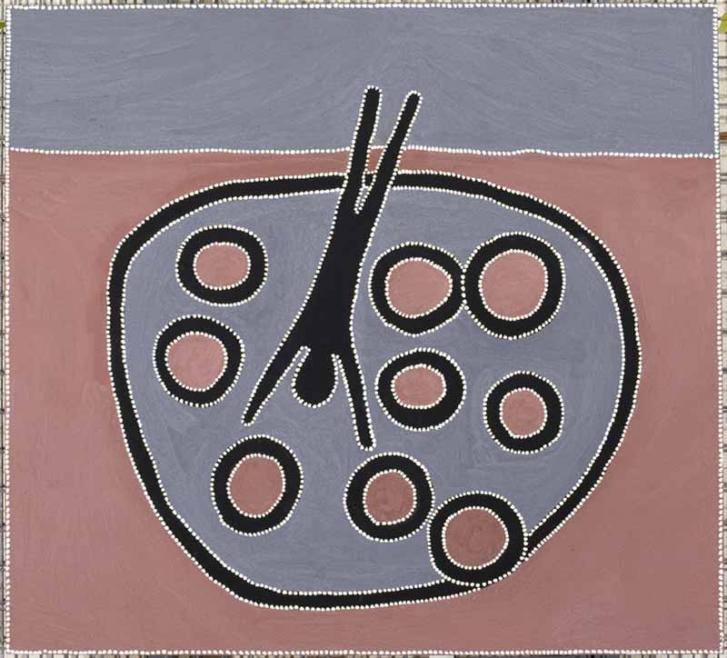 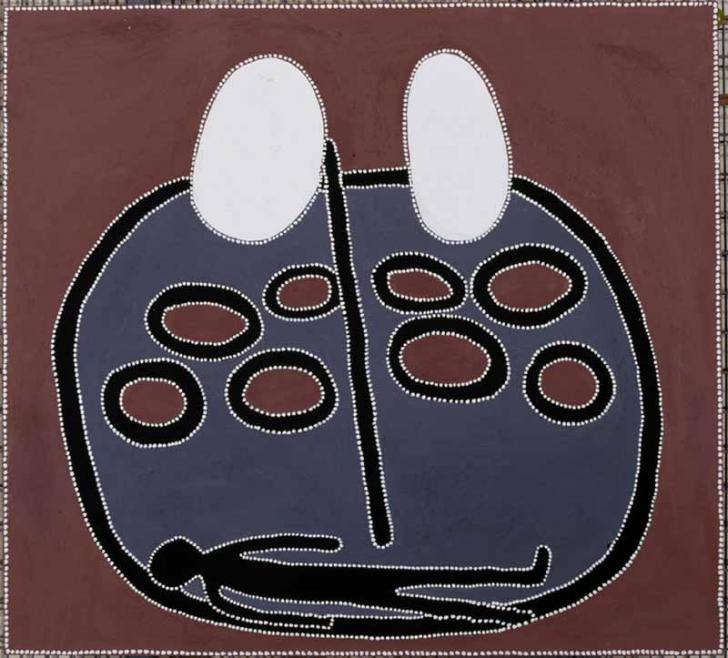 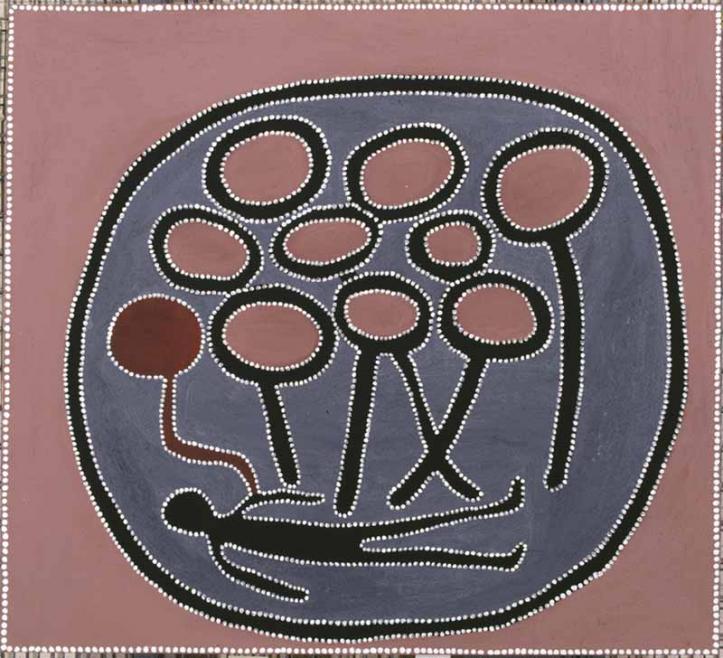 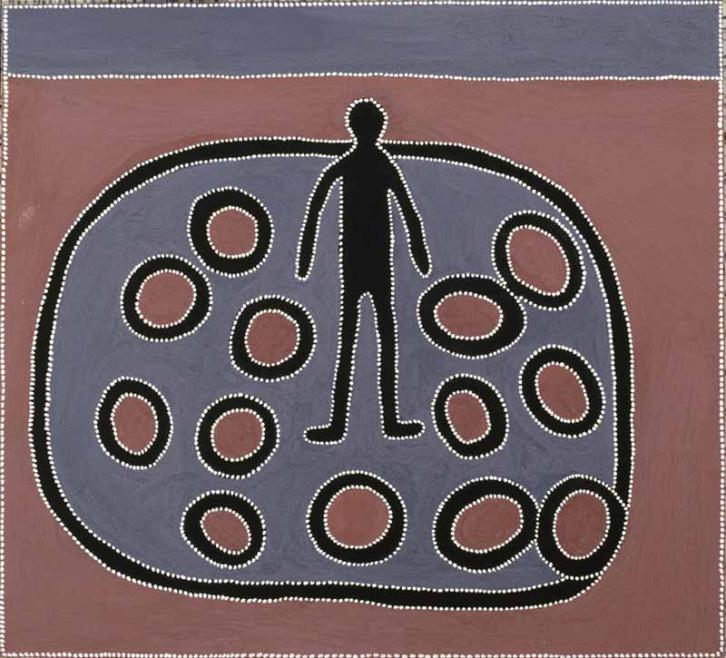 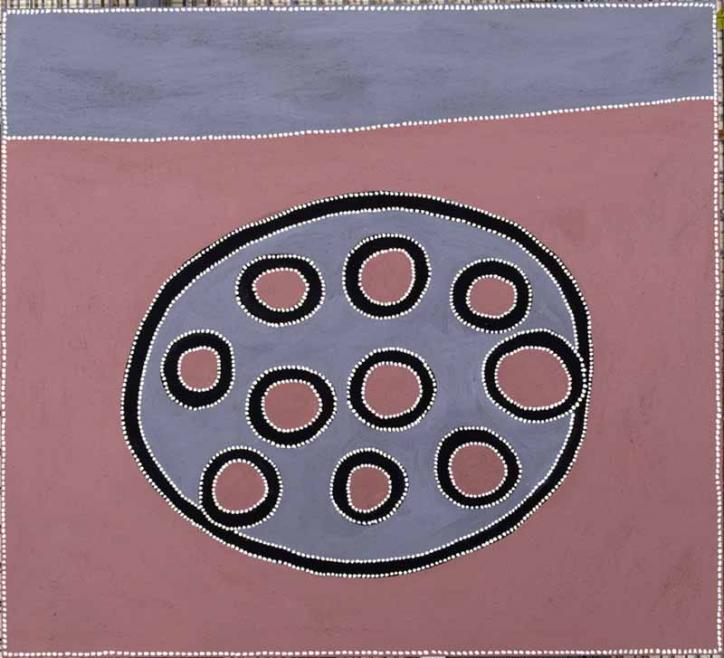 Phyllis Thomas was born at a place called Riya on the Turner River around 1940 and as a young woman she lived and worked on Turner Station where she gardened and looked after poultry. Thomas would often go out bush with her grandmother and other old women where she learnt much about her country. When Thomas married Joe Thomas they worked on various stations until Bow River Station was granted to the Timms family and Rugun community (Crocodile Hole) was set up on that large property. Joe Thomas was instrumental in the establishment of the Rugun community and school where Phyllis Thomas taught children Gija culture, art, song and dance.The escape 2002The Escape is a series of artworks that reveals the story of the artist's uncle narrowly escaping death at the hands of white Cattle Station workers. In recent years there have been a number of artworks produced from the east Kimberley region that describe the massacre of Aboriginal people. These stories have been exposed as elders and oral history from elders who have now passed away retell the witnessed accounts of murder that were once kept secret in fear.PAINTING ONEThis painting depicts country along Turner River called Riya where Phyllis Thomas was born close to the old homestead. In this artwork we see the figures of a man and woman heading out from the old homestead. The man is heading out to hunt Kangaroo and the woman is in search of kapok bush roots. As the pair travel up river, heading east, they see crows and kites circling not far from the homestead.PAINTING TWOThe pair travelled east towards the circling crows and kites to see if something had been killed. They came across a shallow grave where an old man had been buried in a shallow grave. The man's body had been buried too shallow and crows and kites were pecking at his eyes. The man and woman recognised the body of the old man and cried for him before returning to the homestead.PAINTING THREEAnother old man who worked for Turner Station set out because he wanted to return to his own country on the Ord River. As this man was walking along he was spotted by a white station worker on horseback who gave chase with another man at the sight of the old man fleeing the station.PAINTING FOURThe man ran towards the river as he was being chased by two white men on horseback. He came across a waterhole and dived in amongst the waterlilies and hiding under the roots of a tree along the banks.PAINTING FIVEWhen the man dived into the waterhole and hid amongst the waterlilies the two white men stood at the edge wondering what to do. They used a long stick to jab around in the water trying to spear the man.PAINTING SIXThe two white men continued to stab into the water trying to kill the man hiding amongst the waterlilies. So the man cut his own arm under the water. The two white men saw the blood and thought they had wounded the man so they kept stabbing around the roots as the blood drifted in the water. Once they believed they had killed the man they left and returned to the homestead.PAINTING SEVENThe man waited in the water until he felt the two white men had gone. He then emerged from the waterhole and set off for his country near Ord River.PAINTING EIGHTThe final painting shows the waterhole full of lilies after the two white men have returned to their station and the man they were trying to kill has returned to his home on the Ord River.The copyright of this story belongs to Phyllis Thomas and her family. The copyright of the original transcript belongs to Phyllis Thomas, her family, Frances Kofod (Linguist) and Jirrawun Aboriginal Artists Corporation.

Curatorial insightThis work is an eight-panel work that reveals the story of the artist's uncle who narrowly escaped death at the hands of white cattle station workers. This event occurred around the beginning of the 1900s. There are a number of artworks like this from the east Kimberley region that describe the massacre of Aboriginal people. These events remain a part of the living memory of the Gija and other Aboriginal peoples of the Kimberley. (AGWA, 2015)

Reproduction Inquiries Contact us about this artwork
< Back to search
Vernon id: 16780
© 2020 Art Gallery WA All rights reserved.