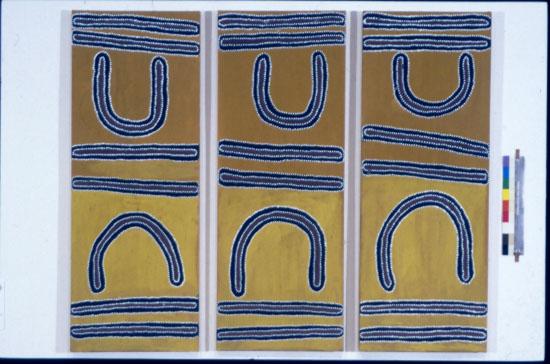 Curatorial insightLike many of his contemporaries, such as Rover Thomas, Queenie McKenzie and Paddy Tjamintji, George Wallaby came to painting late in life. His Dreaming totem is Floodwater, and his subject matter nearly always has some reference to the flooding of Sturt Creek, which flows from the Northern Territory into Western Australia south of the Bungle Bungle massif, ending at Lake Gregory. The creek can expand to thirty kilometres in width during a big wet season and is the lifeblood of the country. The story of Yoorngoo Dagu Dagu is: 'In the Dreaming, when the country was being made, the spotted nightjar, Yoorngoo Dagu Dagu, tried to build a nest many times – in trees, bushes and hollow logs (the semicircular symbols in each panel) – but all the other birds kept stealing his material. One night he looked up into the sky and saw the Milky Way (the parallel lines running horizontally across the top, middle and bottom of each panel) and thought to himself: "I’ll fly up there and build a nest". So he flew off, climbing higher and higher, and eventually fell back exhausted to the ground. Today this small nocturnal bird of prey lays its eggs on the open ground and does not build a nest.' (Croft, Indigenous Art: Art Gallery of Western Australia, 2001)

Reproduction Inquiries Contact us about this artwork
< Back to search
Vernon id: 15866
© 2020 Art Gallery WA All rights reserved.