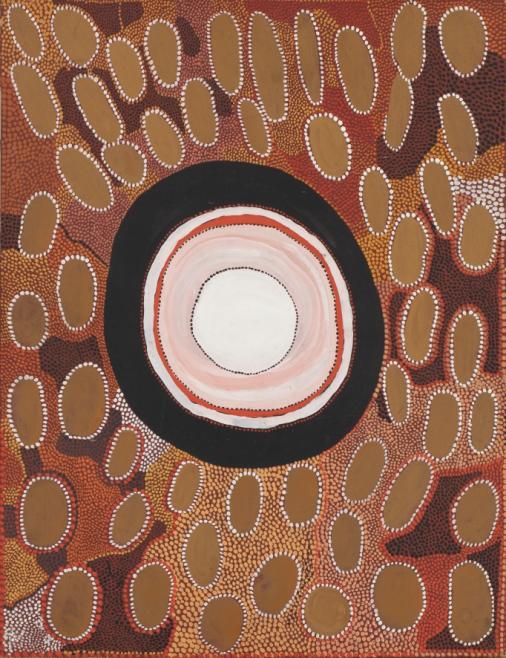 Curatorial insightMick Namarari Tjapaltjarri was born in sandhill country at Marnpi (Bronzewing Pigeon) rockhole, south-west of Mount Rennie Bore in the Northern Territory. After the tragic death of his father and mother, he was cared for by other family members, whom Norman Tindale records meeting in 1932, when Mick Namarari was a 'little child', at Putarti Spring, south-west of Mount Leibig. Subsequently, he attended Hermannsburg Mission until he was eleven years old. He worked in the cattle industry, and became a founding member of Papunya Tula Artists when he was already serving as a member of the Papunya Council. He travelled to Sydney for the production of Geoffrey Bardon's Mick and the Moon (1978), a documentary about the artist and his work. Tjapaltjarri later moved to Walungurru and then set up an outstation at Nyunmanu, located to its south-east towards Marnpi. His paintings since the 1970s have expanded upon the key formal elements found in his earliest works to develop the aesthetic potential of his many and diverse subjects. (Perkins and Fink, Papunya Tula: Genesis and Genius, 2000)

Reproduction Inquiries Contact us about this artwork
< Back to search
Vernon id: 13071
© 2020 Art Gallery WA All rights reserved.