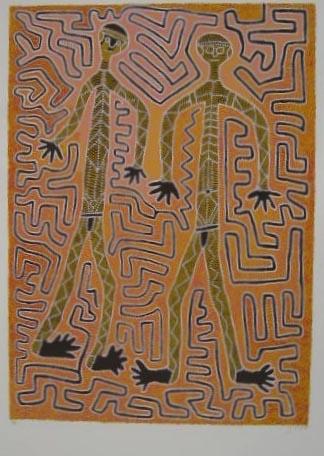 Artist statementParnaparnti is the yellow sand goanna and Kurntumaru is the black goanna that hides in the trees. In the Dreamtime, these two were cousin brothers. They were walking round like men, big men and strong, not like people today. They started off a long way east, and they travelled west. But they didn’t travel in a straight line. They went up and down, north and south, back again on the way. They went straight through the desert and they came out at the salt water, in Broome country. That’s an important story for the old people from all over. As they travelled, the two men saw different places and they gave them names. They met people and snakes and they saw birds and animals, and they gave them all names. These were the first people and animals. They were big. Ordinary people came after. (O'Ferrall, Jimmy Pike - Desert Designs, 1995)

Reproduction Inquiries Contact us about this artwork
< Back to search
Vernon id: 12678
© 2020 Art Gallery WA All rights reserved.