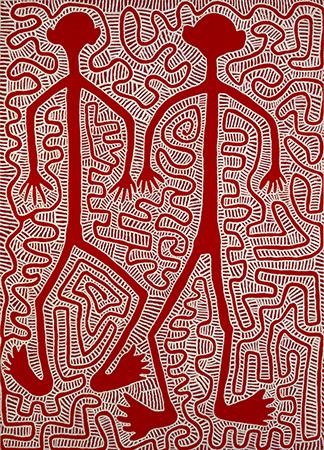 The painting depicts Walmajarri creation ancestors Kurntumaru and Parnaparnti. According to the artist, Jimmy Pike, Kurntumaru and Parnaparnti were two cousin-brothers, age-mates, who travelled from east to west. They were law-men, and their journeys were immortalised in waterholes and other features of the landscape, which they named as they went. The lines around them represent jilji (sandhills) and body painting designs. Pike regularly depicted the two brothers and their travels round all the waterholes. Kurntumaru became the black goanna and Parnaparnti is the yellow sand goanna.Jimmy Pike came to prominence in the 1980s with colourful and stylised designs developed with striking originality. Basing his work on traditional stories and ceremonies of his desert country, Pike used linocut and screen-printing techniques, as well as painting and drawing, to produce a number of iconic images. By injecting colour and using a pictorial language that was in stark contrast to works painted in traditional ochre by his peers, Pike took his work in a more commercial direction. In collaboration with Fremantle-based design studio Desert Designs, his works were most notably reproduced on clothing and other textiles, distributed nationally and featured on catwalks internationally.

Reproduction Inquiries Contact us about this artwork
< Back to search
Vernon id: 12675
© 2020 Art Gallery WA All rights reserved.