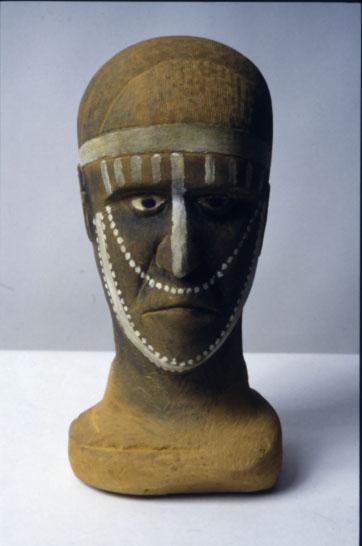 John Dodo Nangkiriny, also known as Big John Dodo, was a ceremonial leader and diplomat for the Karajarri people whose Country extends along the coastline north and south of Bidyadanga, an Aboriginal community south of Broome. His granddaughter Anna Dwyer remembers him as a peacemaker, comparing him to Nelson Mandela in the way that he negotiated the struggle for the Karajarri Native Title determination that was awarded in 2002. His grandson Mervyn Mulardy Jnr remembers him as a pirrka, that is literally translated as a 'root' of Karajarri law, one deep in the knowledge and customs of Country. His powerful personality is here expressed in his carving. John Dodo Nangkiriny's widow, Auntie Rosie Munroe, remembers him carving them 'for fun', while their craftsmanship is likely to come from Dodo's experience carving both ceremonial items and practical items like whip handles (Darren Jorgensen 2018).Ancestral being is made of stone from Mount Phire, where a maban or magic man fled from a Pulany Rainbow Serpent after his son ate forbidden goanna eggs. The name of the maban man was not recorded at the time the head was collected. But it is said that he lives/lived near Eighty Mile Beach, Broome at the time of Pukarrikarra (Dreaming).

Reproduction Inquiries Contact us about this artwork
< Back to search
Vernon id: 12281
© 2020 Art Gallery WA All rights reserved.