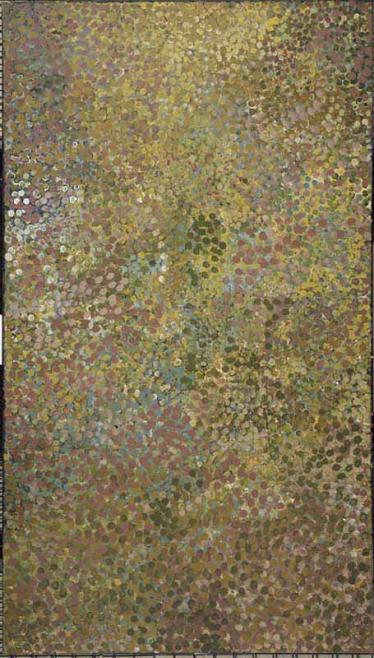 Curatorial insightA senior member of the Anmatyerre community of Utopia, north-east of Alice Springs, Emily Kam Kngwarreye had a prolific and highly successful career as an artist. She was born about 1910 at a small soak known as Alhalkare/Alhkere, and knew a life before the appearance of white men in the desert. Cattle and sheep stations occupied much of her traditional country during her childhood, and she grew up as a stock worker on these stations and also as a domestic servant. In the late 1970s and 1980s, Kngwarreye, along with other women from Utopia, took up batik as a means of expressing traditional stories and designs on cloth, and her earliest works are painted dyed fabrics using the batik technique. Having begun painting on canvas in the summer of 1988/89, she developed distinctive skeletal linear formations, which were then overlaid with dots to form highly abstracted works. The lines disappeared in the early 1990s, when she began to use colour fields of dots raining across the canvas to signify merne (everything) – the plants and flowers of her desert country. From about 1994 she began more gestural work, using broad, dumped colour lines and brush-marks evoking awelye, body designs from women’s ceremonies. Occasionally she produced minimal monochrome works of vertical lines. In the period to 1996 she often used intertwining, meandering strokes as a stylistic device. Her final months were given to sweeping, gestural works. (Isaacs, Spirit Country, 1999)

Reproduction Inquiries Contact us about this artwork
< Back to search
Vernon id: 12203
© 2020 Art Gallery WA All rights reserved.