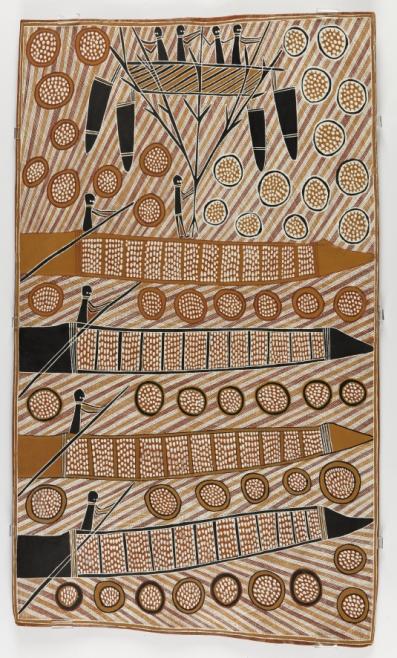 Curatorial insightMilpurrurru, a ceremonial leader for the Ganalpuyngu/Ganalbingu people, was born in the bush south of Mulburrum. Taught to paint by his father – Ngulmarrmarr (c.1911-1977), a bark painter of renown – Milpurrurru gained a reputation as an artist of note in the late 1970s when he refined his style and broadened his subject matter, which became more open to him due to increased ceremonial knowledge. He was living at Maningrida at the time, from where he moved to Ramingining, close to his clan lands. His work appeared in a number of Sydney Biennales, and his art is held in numerous public and private collections. A singer, dancer and ritual healer, he painted in several quite distinctive styles. He also carved sculptures, canoes, tools, weapons, utensils and his own house and studio, as his ancestors had before him. He painted themes from his clan lands, particularly ones associated with the magpie goose and the life of the swamplands. (Croft, Indigenous Art: Art Gallery of Western Australia, 2001)

Reproduction Inquiries Contact us about this artwork
< Back to search
Vernon id: 12127
© 2022 Art Gallery WA All rights reserved.