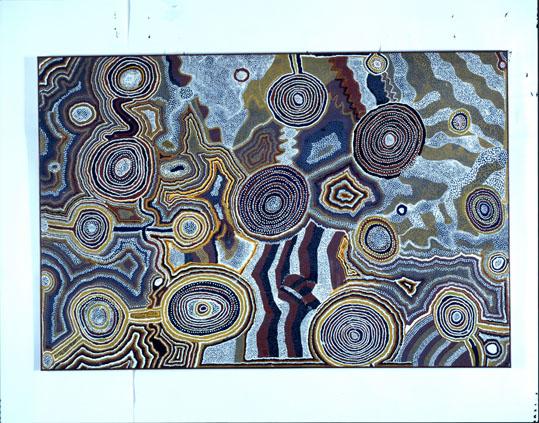 Curatorial insightPippar outcrop is a significant landmark located at the north of the settlement of Kiwirrkurra, just over the Western Australian border in the Western Desert. The linked concentric circle designs represent various rockholes and water soaks, which are linked by lines symbolising creeks. The subject of this painting is part of the important Tingari cycle, which is an extremely secret ceremonial narrative of the travels of the ancestral Tingari Men and Women. The painting portrays a series of waterholes, most of them good for drinking from, in the artists' ancestral traditional lands. It is also a good place for collecting bush tucker and small game. The hills and soaks in the region were created by the Tingari ancestors. (Croft, Indigenous Art: Art Gallery of Western Australia, 2001)

Reproduction Inquiries Contact us about this artwork
< Back to search
Vernon id: 9845
© 2020 Art Gallery WA All rights reserved.