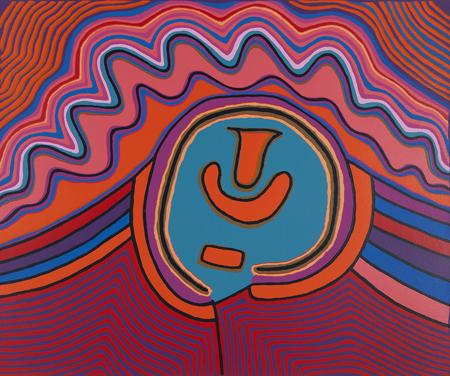 Artist statementThe grandfather starved the grandson for food. Every morning he went collecting yams and kept the good ones for himself and gave rubbish to his grandson. When the grandson went hunting he brought back goanna, bandicoot, snake and give them to his grandfather. One day the grandson went hunting and heard a nyirrin-nyirrin (cicada), he pulled up some grass and up shot water. He returned home and straight away big clouds came. The old man asked him what he had done. The grandson told him that he had been digging a waterhole so rain could come. They built a rock shelter but the old man told his grandson to lie outside and the big rain poured down all night. While the grandfather slept the young man grabbed the firestick and hid it in a rockhole in a cave. (O'Ferrall, Jimmy Pike - Desert Designs, 1995)

Reproduction Inquiries Contact us about this artwork
< Back to search
Vernon id: 4412
© 2020 Art Gallery WA All rights reserved.