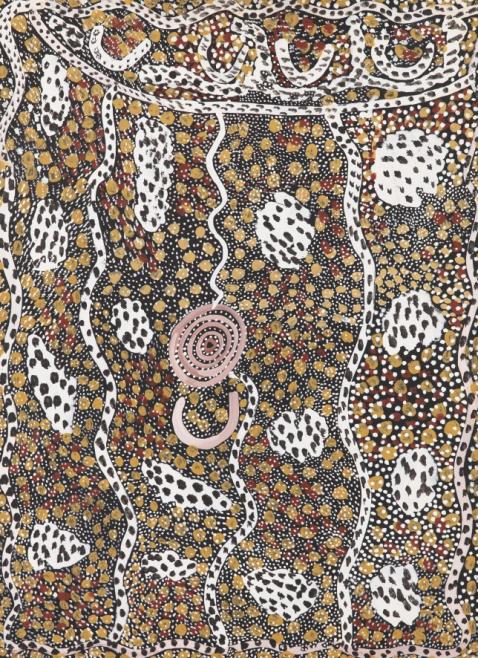 Curatorial insightJohnny Warangkula Tjupurrula was born in Minjirpirri, to the north-west of Ilpilli and south of Lake Mackay in Kangaroo Dreaming country just inside the Northern Territory border in central Australia. Recalling his childhood in the Western Desert, Johnny Warangkula recollected his first frightening contact with non-Indigenous people and their camels, and seeing an aircraft when at Ilpilli in 1930. In August 1932 the Adelaide University anthropological expedition camped at Mount Leibig and made contact with his family. In 1954 Warangkula, along with Nosepeg Tjupurrula, was presented to Queen Elizabeth II at Toowoomba in Queensland. In 1960 most of the community at Haasts Bluff was moved to Papunya. When Geoffrey Bardon arrived in 1971, Warangkula was a Papunya councillor with Mick Namarari Tjapaltjarri and others. A member of the initial group of Papunya artists, Warangkula rapidly developed a distinctive style. His paintings were included in the first consignment of Papunya Tula paintings to the Stuart Art Centre in Alice Springs in July 1971. In June 1998 (and again in June 2000) his Water Dreaming at Kalipinypa 1972, set a world record for Aboriginal art at auction. (Perkins and Fink, Papunya Tula: Genesis and Genius, 2000)

Reproduction Inquiries Contact us about this artwork
< Back to search
Vernon id: 7931
© 2020 Art Gallery WA All rights reserved.