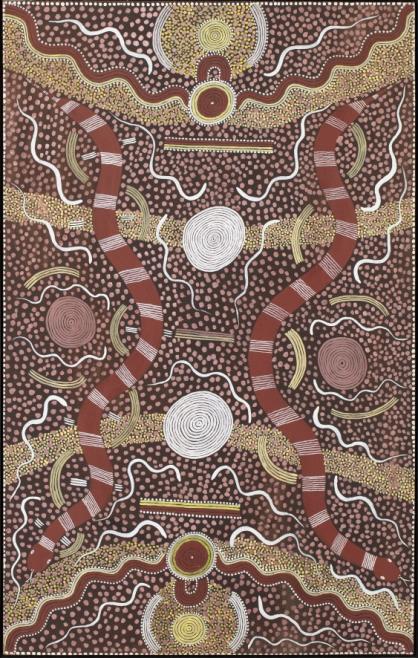 Curatorial insightBorn and initiated at Napperby Station, Kaapa Tjampitjinpa worked as a stockman at Mount Riddock Station. He moved to Haasts Bluff, where he worked at the government cattle station, and migrated to Papunya in the early 1960s, though he had been there during the late 1950s while construction of the settlement was in progress. Clifford Possum Tjapaltjarri recalled that he, Kaapa Tjampitjinpa and Tim Leura Tjapaltjarri, all cousins, had been painting before Geoffrey Bardon arrived at Papunya. Assisted by Long Jack Phillipus Tjakamarra and Billy Stockman Tjapaltjarri, Tjampitjinpa became the principal adviser and artist in the painting of the Honey Ant Dreaming mural on the Papunya School wall. His painting Gulgardi 1971 shared first prize in the Caltex Art Award, the first public recognition any Papunya artist had received for [their] work. Tjampitjinpa was chosen as the first chairman of Papunya Tula Artists when it was established in 1972. Many of his paintings demonstrate what has been referred to as characteristic 'Anmatyerre symmetry'. (Perkins and Fink, Papunya Tula: Genesis and Genius, 2000)

Reproduction Inquiries Contact us about this artwork
< Back to search
Vernon id: 7925
© 2020 Art Gallery WA All rights reserved.