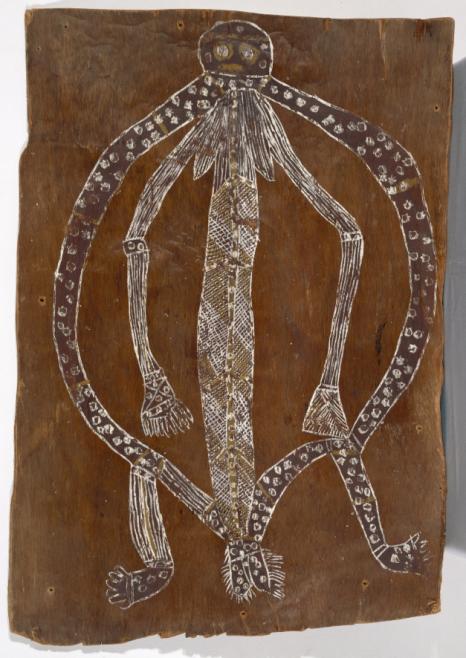 Curatorial insightThis bark painting depicts the Lightning Woman, wife of the Lightning Man, who is one of a group of malignant spirits, the Manandi. The Lightning Man and his wife live at the bottom of a waterhole, Ugulunu. When the rains come, he goes into the thunder clouds roaring in a loud voice, creating thunder. He reaches down from the clouds and strikes people and trees with one of the stone axes he carries. If Manaragan is disturbed in his waterhole, he causes great storms that flood the country, and his wife can do the same. The lightning symbol is represented in the rarrk painted on her body from neck to knees. The Lightning Woman is depicted on barks very rarely. (Croft, Indigenous Art: Art Gallery of Western Australia, 2001)

Reproduction Inquiries Contact us about this artwork
< Back to search
Vernon id: 9921
© 2020 Art Gallery WA All rights reserved.