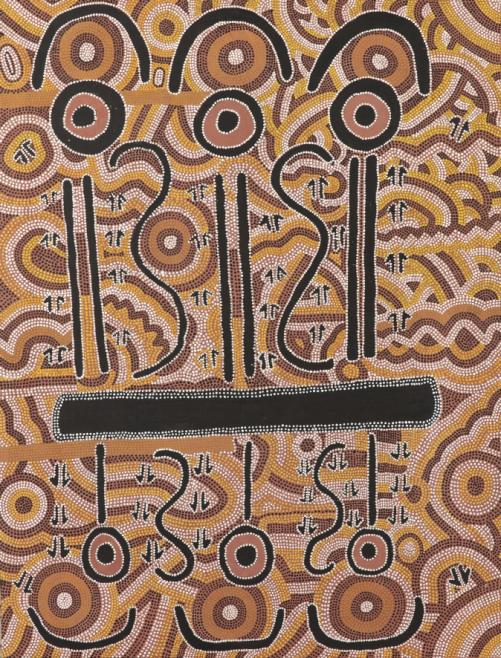 This painting represents the Hare Wallaby Dreaming, which belongs to Japangardi and Japanangka. Starting at Kuyukurlangu, an old man hare wallaby, watulee, travelled to Yatunjamalu. He went west through Kunajardunyungu and stopped at Malititi Warnu, where there was a coolibah tree. He took off again until he reached Putalya, and there he hit the ground with his tail. This is where a man of Jangala skin group, Wirliyajarlu, came from the hare wallaby dreaming. It was here that Purlu, which is a type of tick, bit the hare wallaby and stopped him going any further. So then the wallaby went back under the ground to Kuyukurlangu, after which he set off in another direction to Kunajarrayi (Mount Nicker). At Kunajarrayi he turned into a Japaljarri/Jungarayi Dreaming.

Reproduction Inquiries Contact us about this artwork
< Back to search
Vernon id: 672
© 2021 Art Gallery WA All rights reserved.