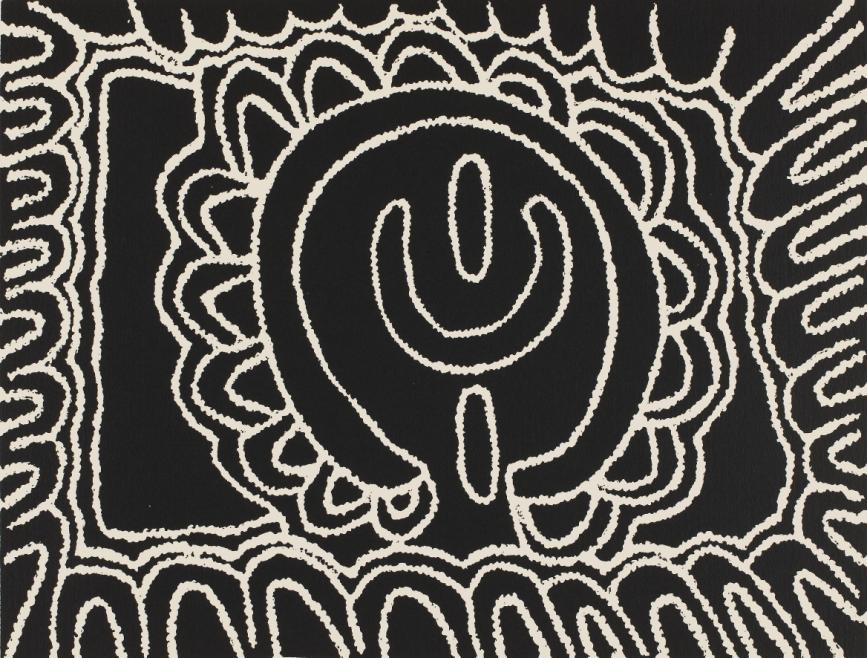 Artist statementGrandfather and grandson bin living in this place in Dreamtime. Old man sleeping by fire in rock shelter. Young man sleep outside – told ‘this place for old men’. Young man cover himself with sand, build little wall to cover himself. They don’t let him in. They punish him. When this old fella go to sleep, big rain comes in. Young fella wakes up. Grabs that firestick from there, and puts him in another place, hides it under a rockhole. Comes back and finds old man still asleep. He get all the food and take it and get the firestick from the other rockhole. Old man got up and there was nothing – no fire. Looking around and calling out Bu Bu – sound like big bird – he answers. He tracked him right up to Kulijirri, a little waterhole, nearest one. He got a big sandhill. He follows him up to big sandhill. Young man cooking kangaroo, with two dogs. They argue about the fire. The two dogs they grab the old man, they fight him. They kill him right there. He turns into two rocks. He roll down the hill to waterhole named Kulkurr far away. (O'Ferrall, Jimmy Pike - Desert Designs, 1995)

Reproduction Inquiries Contact us about this artwork
< Back to search
Vernon id: 9260
© 2020 Art Gallery WA All rights reserved.