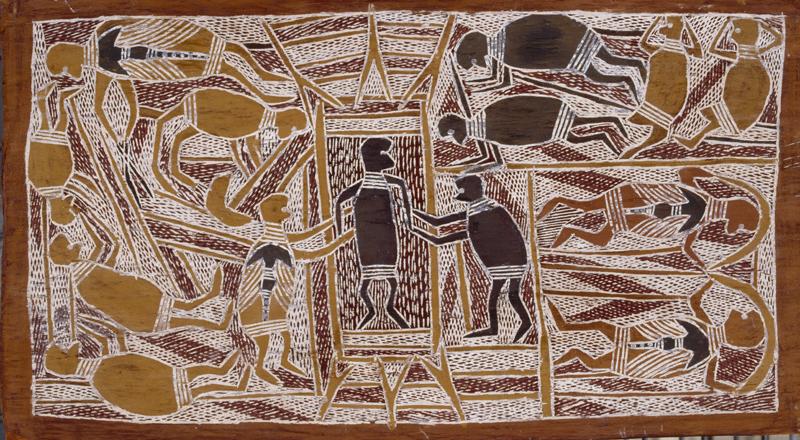 Mawalan Marika, a great law man and cultural leader of the Rirratjingu people of Yirrkala in Arnhem Land was born in 1908. In 1963 Marika was one of the artists involved in the Land Rights bark petition. This petition was from the Yolngu people and a protest to their traditional lands being developed as a bauxite mine. Presented to the Government in the form of a bark painting this petition initiated what would be the beginnings of formal recognition of traditional custodians, the roles they play in maintaining their lands and a timeless relationship with their country.In this bark painting, Funeral Ceremony Marika depicts traditional ceremony and mortuary rights of the Yolngu people. The central figure is deceased and is surrounded by his people, who now prepare his body and spirit to take its last journey to the afterworld, until the spirit can be reborn.

Curatorial insightMawalan Marika occupies an important position in the history of Yolgnu art. Born before intensive European colonisation, he moved to the mission station of Yirrkala when it was established in 1935 on land belonging to his clan. Paintings by him were among the first commissioned by the missionary Wilbur Chaseling. In 1959 he was one of the artists who produced a series of paintings for Stuart Scougall and Tony Tuckson for the Art Gallery of New South Wales. These paintings were characterised by the grandeur of their conception and the fact that they represented creation stories in episodic form. With Narritjin Maymuru and Munggurrawuy Yunupingu, he developed a narrative mode of representing these stories that was characteristic of much Yirrkala art from the 1960s to 1980s. In 1962 he painted several sections of the panels for the Yirrkala church. He was also one of the leaders of the Yirrkala community in their fight for land rights in the 1960s and 1970s. (Morphy, Aboriginal Art, 1998)

Reproduction Inquiries Contact us about this artwork
< Back to search
Vernon id: 1260
© 2020 Art Gallery WA All rights reserved.